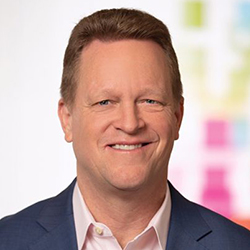 Since joining Lilly in 1987 as a scientific systems analyst in Lilly Research Laboratories, Steve has held a range of roles in information technology and human resources. Following a series of managerial assignments, Steve served as human resources director for Lilly’s U.K. affiliate and then as executive director of human resources for the U.S. affiliate. In 2004 he was named managing director of the Australian affiliate, returning to the U.S. in 2007 to provide HR leadership for the global sales and marketing organization before accepting the role of vice president supporting the Lilly Bio-Medicines and Emerging Markets business units. He assumed his current role in 2011.

Steve earned his bachelor’s degree in information systems from the University of Indianapolis.

Steve serves on the board of trustees at the University of Indianapolis and the board of Ascend Indiana. He previously served on the governance board for Make-A-Wish in Ohio, Kentucky, and Indiana from 2012-2019.